On the occasion of the World No Tobacco Day 2019, the JATC Coordination Team, via the George D. Behrakis Research Lab of the Hellenic Cancer Society (HCS), has released the following announcement.

Smoking, a classified disease, is the greatest epidemic of all time. Although smoking affects the whole body, the respiratory system is the point of entry and main target for the harmful effects of the noxious toxic substances inhaled through various tobacco products. Some of the main known tobacco-induced respiratory diseases include trachea, bronchus, lung cancers and chronic obstructive pulmonary disease. Smoking is also known to exacerbate asthma and is a risk factor for respiratory infections.

In addition to active smoking, passive exposure to tobacco smoke is another major public health concern, having been scientifically proven to cause adverse health effects since 1981. Passive smoking causes 800,000 deaths of non-smokers every year in which 250,000 are children.

The major causes of death from respiratory diseases in the EU is lung cancer and COPD, both highly associated with smoking and therefore preventable (Figure 3 from ERS White-book) 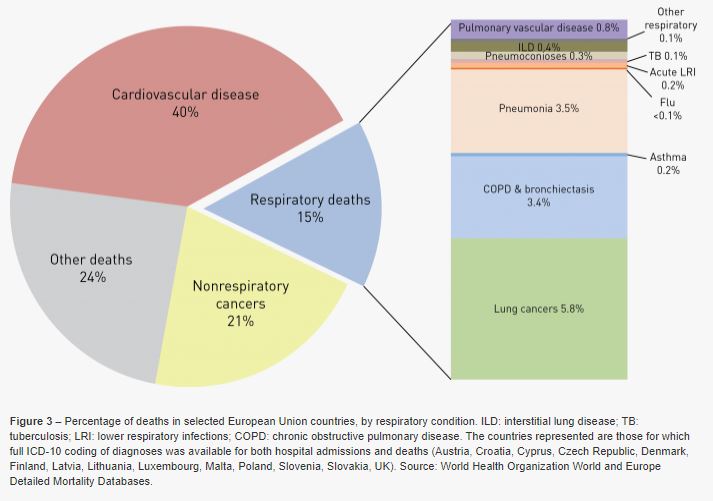 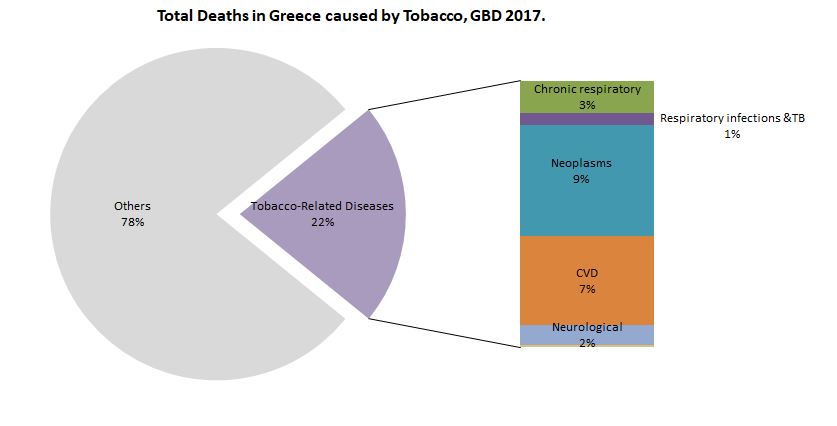 In Greece, 1 in 5 deaths is caused by tobacco.

One in 5 deaths is preventable.

According to World Health Organization Health Statistics 2011, in the EU the battle against communicable respiratory diseases will improve by 2030, with a reduction in deaths from Tuberculosis and lower respiratory infections due to improved treatment. However, respiratory diseases such as trachea/bronchus/lung cancers and COPD will continue to increase by 2030 if trends do not change. These deaths are preventable.

In 2009, the direct healthcare costs of respiratory diseases attributable to smoking was €27.4 billion. Tobacco takes a huge toll on our lungs and lung health costs 2.5 million years of lives lost for chronic obstructive pulmonary disease alone.

A major factor that can change this trend is smoking cessation.

As seen below, quitting smoking can have a major impact on lung health (Figure 2, from ERS White-book). 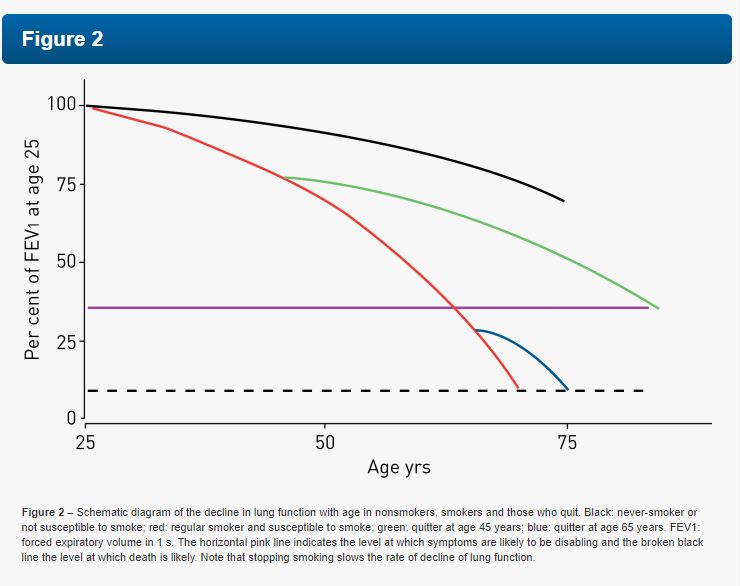 …It is never too late to quit smoking. The earlier, the better!

…And even better, never starting.

As experimentation starts in early adolescence, this age is the primary target for tobacco prevention. The George D. Behrakis Research Lab through the SmokeFreeGreece initiative works towards tobacco prevention with a special focus on youth and the school community.

Furthermore, the George D. Behrakis Research Lab of the Hellenic Cancer Society is coordinating the Joint Action for Tobacco Control that aims to support the implementation of the Tobacco Products Directive throughout the 28 EU Member States. Since the WHO European region has one of the highest worldwide proportions of deaths attributable to tobacco, JATC aims to offer significant added value at the battle against the smoking epidemic and the devastation of tobacco-related deaths and disease burden. The ongoing notable progress of all 9 JATC Work Packages, aspire to provide an advanced approach to Public Health issues throughout the European countries.”