Even when menthol cannot be tasted, the substance makes it easier to inhale tobacco smoke. This way, menthol makes smoking more attractive for young and novice smokers who are not yet used to inhaling sharp, pungent tobacco smoke. There is strong evidence for this effect in independent literature, but not in the reports submitted by tobacco manufacturers. This is one of the key outcomes of Work Package 9 of the Joint Action on Tobacco Control.

Since May 2020, tobacco products containing a characterizing menthol flavor are prohibited in the EU. However, menthol may still be added in low amounts, which do not lead to a characteristic flavor. According to the European Tobacco Products Directive, manufacturers of tobacco products are required to disclose to the Member States which additives they use in tobacco products. The manufacturers also had to provide additional information about, among other things, the harmful and addictive effects of 15 priority additives, including menthol. The reports about the priority additives have been reviewed by a group of independent experts, in Work Package 9.

Concern about menthol
The tobacco companies conclude in their report that low amounts of menthol do not facilitate inhalation of tobacco smoke. However, the WP 9 experts found strong evidence for such an effect in independent literature. Their advice is therefore to ban the addition of menthol in tobacco products in any amount. Some countries, such as Germany, have already banned menthol and similar substances due to the fact that they facilitate smoke inhalation.

Tobacco industry reports unreliable
The main conclusion of the WP 9 experts is that the reports that were submitted by tobacco manufacturers are of insufficient quality. For example, various relevant independent studies have not been included in the reports, as was the case for menthol. In addition, the WP 9 experts found limitations in the research methods and statistical analyzes used by the tobacco manufacturers. The Wp 9 experts therefore question the scientific validity of the industry reports. They recommend that the outcomes and conclusions of the industry report should therefore not be used by Member States to guide policy. 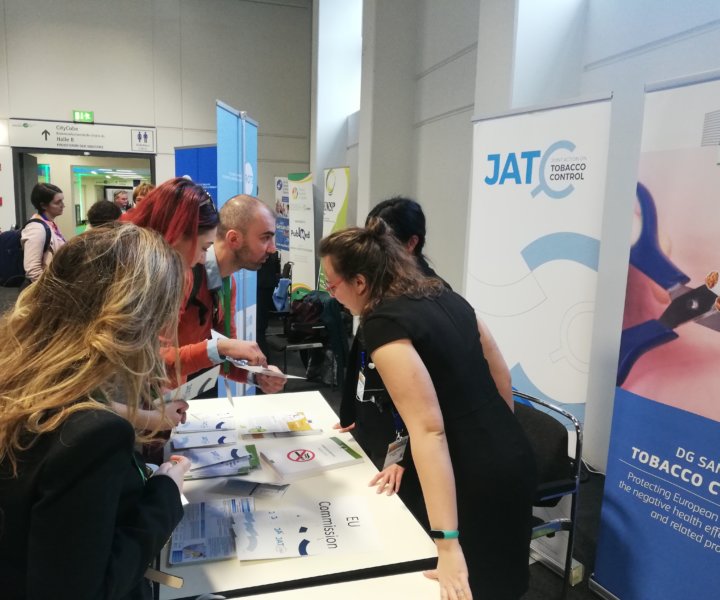 The 2nd JATC Interim Meeting took place on February 4-5, 2020 in Brussels, joined by the members of the Ingredients Subgroup of the Expert Group in Tobacco Control. More than…

The TackSHS project, an EU funded project tackling tobacco-related chronic diseases in Europe, was recently completed with a Project Final Conference that took place in the European Parliament, in Brussels.…

The EU Health Programme High Level Conference took place in Brussels (30 September 2019), organized by the Consumers, Health, Agriculture and Food Executive Agency (CHAFEA), with the support of the…

On the occasion of the World No Tobacco Day 2019, the JATC Coordination Team, via the George D. Behrakis Research Lab of the Hellenic Cancer Society (HCS), has released the…

The Interim Meeting of the Joint Action on Tobacco Control (JATC) took place on February 6-7, 2019 in Brussels, with the presence of members of the Subgroup on Ingredients and Composition…